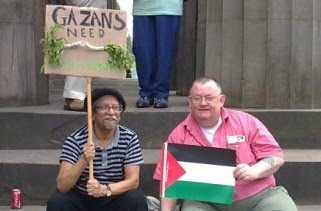 This clourful looking wee guy wins the most original placard award for highlighting the stupidity of the blockade. The plant and the coloured word at the bottom is coriander which is banned from Gaza; honest it is. 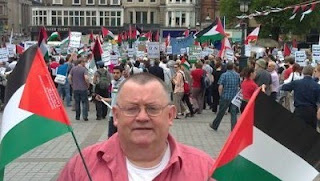 The square at the National Gallery starts to fill up; can't you feel the excitement. 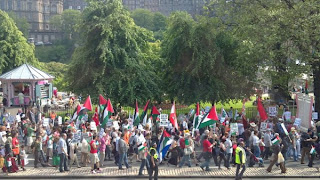 Young fit daughter Clare manages to leave the march dodge the Police officers; the Police horses and cars to take this from a vantage point across from the route; then make her way back to the crowd.

Terry the Liberator rises from Sofa and proclaims.. Enough!!

Is that a MOSSAD hit man lurking in the doorway of Jenners or Mrs Terry getting her buy one get one frees in the strife torn streets of Edinburgh.

While you were out supporting - in a non violent way - those who believe genocide is the answer to Israel, John McDonnell, candidate to lead your party, said he regretted not assassinating Mrs Thatcher.

Another funny joke Councillor, in the great tradition of Liam Byrnes 'There's no money left?'

The man is scum and should be kicked out of the party let alone be aiming to lead it.

Do you think, perhaps, the ordinary folk in these places might prefer them 'as was' rather than have the corrupt thieves currently in charge, starving them to death?

(Anonymous) 07/06/10
Israel has a great many apologists for its crimes doesn’t it? and quite a lot of useful idiots as well.

(Byeck) 07/06/10
What you say might have some currency if both these men actually made serious remarks; alas those who genuinely believe them to be serious are really to be pitied.

The Hitler supporting Daily Mail knows that there is a gullible readership of useful idiots out there; that’s why they continue to print such blatant tosh.

(Anonymous) 07/06/10
Even Racist malcontents are entitled to their opinion; I am always willing within reason to give people like you the chance to humiliate yourself as well as reminding readers that there still a lot of stones with rodents like you lurking under them.

So, can we assume that you really do believe S Africa and Zimbabwe are better now than they were?

Guess the thousands of Matabele, slaughtered by Mugabes Cubans and the hundreds of S Africans, necklaced with burning tyres by Mandela supporters would disagree, but, you're entitled to your opinion, Councillor

I don't much care for what racist goons like you assume.

You were driven out of S.A. and you will be meet the same fate everywhere else because you run away when the field is even, you are cowards some of you don't even have the bottle to use their name.

"Hamas's security forces were raiding several non-governmental organizations in the Gaza Strip and seizing their equipment. According to the Jerusalem Post,

After conducting a thorough search of the offices of the organizations….Hamas security agents confiscated files, documents, computers, fax machines and other equipment.

The agents also informed the managers and workers of the organizations of the Hamas government's decision to close them down indefinitely.

They did not provide any reasons behind this decision.

Maybe Hamas failed to provide a justification because it was too busy shutting down other human rights groups in Gaza. The day after Hamas destroyed the operations of groups such as the Sharik Youth Institution, Bonat Al-Mustaqbal (Future Builders) Society, the South Society for Women's Health, and the Women and Children Society it "stormed the offices of another two NGOs, the Palestinian Mini Parliament and the National Reconciliation Committee. They confiscated the keys to their doors and ordered them closed."

So that’s how Hamas went about winning such a decisive democratic electoral victory then; we must try that here.

David have you the remotest idea just how bloody stupid you sound; it will take time to enlighten all the useful idiots who swallow Israel’s lies but we must keep trying.

Why no comment about recent events are you one of those experienced observers who just absolutely knows that sticks and metal bars and knives are far superior to Tear gas, high velocity rifles and side arms; you really can’t get much more stupid can you? can you David? David!

Blaming the media for reporting the 'jokes, rather than the idiots who told them?

So it's not true that HAMAS closed down half a dozen NGOs, then?

(Byeck) 08/06/10
The idiots are those who try to suggest that the MP actually meant he wanted to “kill Thatcher” a desperate and stupid position for anyone to put themselves in even by your standards.

(David Duff) 09:23
I really don’t know or care; what I do know though is that they are the democratically elected Government of the Gaza Strip no matter what Israeli/American propaganda is directed against them they continue to enjoy solid support. Would you like to try explaining why?

McDonnell's 'kill Thatcher,' quote doesn't qualify as either desperate or stupid, in your book then?

Terry, with this clown standing for Leader and Harman insisting on a 50% women Shadow Cabinet, regardless of ability, who says Labour dont have sense of humour!

You "don't care" that HAMAS smashed up and shut down 6 NGOs doing good works in Gaza? Fascinating!

You ask why HAMAS continues to keep support. This might explain why any opposition might be, shall we say, discreet:

"Hamas police wielding clubs beat and pushed residents out of dozens of homes in the southern Gaza town of Rafah on Sunday before knocking the buildings down with bulldozers, residents said.

For years, Palestinians have criticized Israel for destroying houses, mostly because they were built without permits issued by the military. Now, Rafah residents complained, their own government, run by the Islamic militant Hamas that seized power in Gaza in July 2007, has done the same.

"They promised reform and change — instead they've destroyed our homes," shouted Miasar Gan, a 54-year-old woman. Gan said she and her husband had nowhere else to go."

"seized power"? Tell me it ain't so! The Arab News must have that wrong, surely, Councillor.

Concentrate now; those who regard McDonnell’s quote as serious qualify as either desperate or stupid or in your case both; how many times man FFS.

You of all people should not call anyone a clown; let me tell you what Harriet is doing because it’s clearly way over your head. She is flying a kite in the knowledge that she will not get through her 50% quota what she hopes to do is focus people’s minds on the under representation of women in the cabinet and politics in general and; in that way increase women’s numbers in the shadow cabinet; do you ever consider paying me for this stuff?

(David Duff) 14:24
I don’t really believe that you are that naive; that makes you a liar.

Hamas fought a bloody civil war in Gaza against Fata and the Israeli Govt. has used them as an excuse for their crimes ever since. The homes you refer to were built because the Israeli occupiers gave their permission for them to be built; Hamas would quite rightly see that as a provocation. This is a wee bit more complicated than the Israeli crap that you swallow so easily would have you believe.

Blimey, those crafty Jews get everywhere, don't they, Councillor?

Er, the quote I gave you, complete with link, was from the 'Arab News' which is Saudi owned and based.

"I didn’t mention Jews to you what are you getting at?"

After my quotation from a report concerning HAMAS tearing down the houses of Palestinians you wrote:

"the Israeli crap that you swallow"

I then pointed out, in effect, that it was not "Israeli crap" but Saudi crap, if indeed it was crap at all. Given that it was an Arab report I thought you might have given it more credence. Alas, I am forced to come to the conclusion that any report from any source which conflicts with your, er, world view is dismissed as crap.

Oddly enough, I have just finished reading an essay on the subject of an experiment carried out back in the '60s in which a psychiatrist place three men in a closed ward for a period all of whom were convinced they were Jesus Christ. I don't know why, but I thought of you. If you're curious you can read about it here:
http://www.slate.com/id/2255105/

Oh, I've just remembered, curiosity is not one of your virtues, is it?

What does the above have to do with Jews? Please explain yourself.

The last time I looked the ruling parties, the administration, the armed services and the government of Israel was in the hands of Jews.

(David Duff) 16:35
Israel is a secular state you moron why do you find it necessary to mention Jews? The institutions you refer to are in the hands of Israelis Jewish has nothing to do with it. Can you! explain yourself and what you mean by the phrase "in the hands of Jews"

My life already, I never knew Glaswegian education was this bad!

"The Jews (Hebrew: יְהוּדִים‎), also known as the Jewish people, are a nation and ethnoreligious group originating in the Israelites or Hebrews of the Ancient Near East. The Jewish ethnicity, nationality, and religion are strongly interrelated, as Judaism is the traditional faith of the Jewish nation."

"Israel, the Jewish nation-state, is the only country in which Jews make up a majority of the citizens.[81][82] Israel was established as an independent democratic state on May 14, 1948."

Now what is it about the word 'Jews' and their relationship to teh state of Israel that you still fail to understand, Councillor?

“The Jewish people are a nation”

Ignorant nonsense. They are no more a staet than catholics and protestants are a state.

You clearly don’t have a grasp of this; Israel is not a Jewish State it is a secular state with a majority population of Jews, not the same thing at all.

You still haven’t explained your remark about “those Jews and Israel” what did you mean. Should British; American; French; Russian Jews Etc. all have dual passports if as you say “the Jewish people, are a nation”
Have another try.

Should the descendents of all those Scottish highlanders who fled to America have British passports?

A Jew is a Jew where-ever he is but in Israel he is in a majority.

(David Duff) 13:49
Majority Shmajority there is no such thing as a Jewish State.