Through the miracle of modern technology I have just discovered that I can look at a world map and see indicated where my web visitors come from. Canada has many entries, Ontario to be precise, not because my web is a big hit over there but because I have relatives who live there, it was great to realize that my cousins were reading my articles, they have probably concluded however that I'm a nutter but it still gave me a buzz. My uncle Pat Boyle married my aunt May and went there a long time ago, I can still remember my brothers Arthur, Hugh and myself pleading with him not to go and breaking down in floods of tears, he stayed with us at that time and it was like having another dad, one who was less strict than our real dad and a never ending source of stories, songs and adventures, we loved him and thought the world had ended when he left, poor aunt May got the blame I'm afraid, life at that age is more black and white and she was taking uncle Pat away and was therefore the villain. We reunited in later years when travel became more accessible and by then he had three lovely daughters, my cousins Suzanne, Janice and Maureen who I think are now leading their own lives and have children of their own. A wee while ago I received an email from a Canadian cousin which contained photographs, unfortunately I never managed to get the computer to let me see them and I lost the email and pictures, I would love them to have another go at sending me some stuff, if they read this I might be lucky, anyway best wishes to all of them along with my other cousins from the Power family.
Posted by Cllr Terry Kelly at Monday, August 28, 2006 No comments: 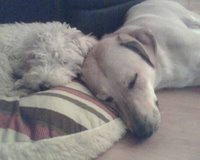 Hi dog lovers everywhere this is Bessie here, as you can see big Molly and me have called a truce, I intend however to wake up before her and give her a wee nip just to keep my paw in. I'm in the bad books again because I stole a bag of sweets from the shopping bag of a family friend who visited us, I call that initiative, I've also decided to offer a paw for a treat after them trying to coax me to do this for about a year, it's beneath my dignity but it keeps them happy. We still roam around like the Kray twins when we get off the lead, we gang up on other dogs and joggers are a favourite, also family picnics, 'weans mean grub' cyclists are fair game as well, sometimes we can get them to career off the track into the bushes, that's great fun, what a life ! Hi big Molly here wee Bessie has much longer and sharper teeth now that she's grown up, she's still a midget though, she's a strong fast wee brawler though who would fight with her shadow and often does, she knows no fear and it's me who has to back her up when she starts a rammy with other dogs, usually big ugly brutes like Alsatians and lurchers with teeth like crocodiles. When this happens I immediately slip into Staffie mode and put the arm on them, some of them need a good slap before minding their manners, once I sink the choppers in I can hang on like a 'scrap yard mongrel' and that puts them off. Anyway the weathers been great and we are swimming and getting filthy and lying in the sun the boss says we stink but who cares, this beats Cardonald, I often think of my mates whom I left behind up there, I wish more people would rescue them, I can still hear their cries in the night when they are feeling lonely and unwanted. You can't guarantee a magnificent specimin like me but they are worth the effort, they just need another chance.
Posted by Cllr Terry Kelly at Tuesday, August 22, 2006 No comments: