THE SEASON OF LOVE AND GOODWILL TO ALL MEN - ALEX (THE SPIV) SALMOND WILL SOON PUT A STOP TO THAT !

When someone is prepared to exploit the name of his own mother for his own gain; when they are ready to exploit tragedies like Dunblane and drowned fishermen; when they are prepared to change the name of their political party to get their name to the top of the list of names on the ballot paper; why would anyone be surprised when that person exploits and twists the Christmas message for political gain, I refer of course to (the spiv) Salmond and the repellent Christmas Card scandal. The Christmas message is that the SNP and independence are a good thing; forget all that happy Christmas junk that’s for wimps; Alex (the spiv) tramps on all that; he regards it as a right load of old pony. The SNP that’s what
Christmas is all about ; the baby Jesus wrapped in tartan swaddling.

When disasters happen; when people’s lives are torn apart by events; we; most of us that is; feel a great sense of pity and instinctively look at how we can help. With Salmond (the spiv) there is a different mechanism which automatically kicks in; it’s one which says with rat like cunning “what’s in this for Alex (the spiv) Salmond” that always comes first. Now we see that even Christmas is to be subjected to his dogmatic arrogance. The first minister described the offensive painting as evocative; evocative of what? it’s certainly not Christmas that’s for sure; I found it quite disturbing in a way which I struggled to understand. I then realized the reason for my disquiet, it was evocative right enough. It was evocative of the kind of military propaganda art much loved by the Nazis; it reminded me of all those paintings and posters showing photogenic healthy young Germans marching in to “the new future” I wonder how much was subliminal? does the artist accept the similarity in the images. Did Salmond (the spiv) not notice it? This is a profound insult to Scots. and should be withdrawn; this is more a political stunt than anything to do with Christmas; Salmond (the spiv) has no shame.


The young tartan clad girl holding the flag and gazing into the wintery middle distance would have been more appropriate on a political poster similar to those which circulated in Germany circa 19 38. I wonder if this wee girl might someday look back on this and realize that her uncle and the first minister have used her to politicise Christmas. It may or may not be of comfort to her but she might also reflect on the fact that she is not the only one.

The first minister was forced to speak about the lunatic SNP fringe lately; the hooligan SNP element that pollute the comments pages of newspapers. He effectively gave them a slap on the wrist and now boosts their cause by pandering to their resentment and paranoia by sending out this disturbing message; I would wager that a great many of that mob would have noticed the similarity with martial propaganda and revelled in it.

At a traditional time of goodwill; Salmond (the spiv) has dragged Scotland into the gutter again; he is incapable of seeing a belt without hitting below it. Having such a seedy and disreputable character as Scotland’s first minister is dragging everyone down, he ought to go and stop harming Scotland’s standing; he has now gone to Copenhagen and stank the place out; he can empty a hall faster than a bomb scare. He can always say that he chased the Terminator (big Arnie) out of town; killing hundreds of people single handed is no bother to Arnie but the shame and embarrassment of sharing a platform with (the spiv) was just asking too much; they all have their reputations to consider.

Here are the images; I find them comparable and disturbing; the idea that a senior politician could look at the painting of the young girl and not equate it to the bellicose fascist propaganda circa the 19 30’s is extraordinary indeed; people I’ve spoken to spotted it right away; make up your own minds. 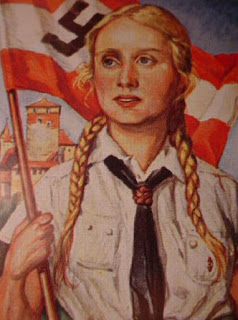 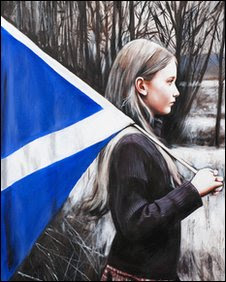 Oh Dear! Only a thicko could compare Alex Salmond and the SNP with fascism!

Especially coming from a member of a political party that has actually murdered their own citizens re the London Bombings.

Let us hear you call for an independent inquiry into that before you go off slagging any other party as being fascist.

A revealing reaction; your inability to make sense of this confines you to anonymity; no one would want to admit to such idiocy.

“could compare Alex Salmond and the SNP with fascism”

Not guilty I’m afraid; I merely invited people to look at the images and make up their own minds; you have clearly spotted the link as I’m sure most people will; you rather prove my point don’t you think?

“Labour murdered their own citizens re the London Bombings”

I can hardly wait; tell me about it.

I think it would have looked better if bully boay Iain (Braveheart) Nicolsoin was holding the flag and looking into the river cart.

What do you think!

(Anonymous) 13:30
I assume this is tongue in cheek; the image of him standing with his wee flag wearing his wee tartan frock; with his wee knife down his wee woolly socks and gazing at the flowing waters is definitely one for Salmond’s Christmas card next year.

But bullying? Come on who would allow themselves to be bullied by someone like that; the guy is a figure of fun; a crazy idea.