TO PARAPHRASE MARK TWAIN - "REPORTS OF OUR DEATH ARE AN EXAGGERATION" - THE LABOUR PARTY.

Rumour has it that the majority of those present were saying, "whose the grey haired guy with the beard talking to Terry Kelly" (see picture). 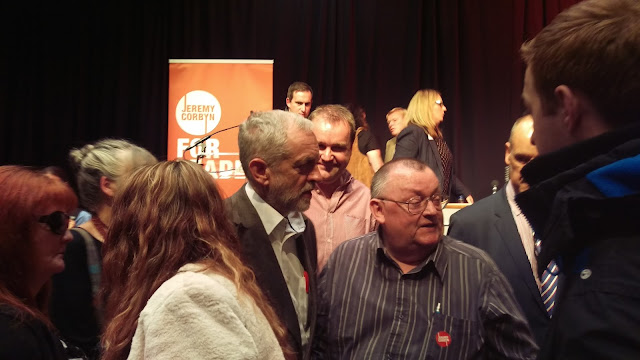 The Athens of the North, Auld Reekie, Edinburgh, this afternoon Aug. 14th. 2015 at the Festival Conference Centre, where the main auditorium is chock-a-block with what looks well in excess of its 600 capacity, another hall in the complex is also packed with several hundred people. The Jeremy Corbyn crusade to become leader of The Labour Party of course was in town and for today this was the hottest ticket in Edinburgh including the festival.

The usual cross section of good causes were being touted at the door as Fringe goers as well as the “well set” burghers of this beautiful city looked on and wondered if we “had all had oor tea”. They also wondered what was going on and whether they should join the queue just in case they missed a show, this time honoured rugby scrum of competing political groups jostled for position as always and as always they managed to do this without trouble breaking out, you might think that with all the groups being left wing to one degree or another this would be easy but it's not, so well done to all of them today. My theory for this is that the lack of rancour was down to the man we were there to hear Jeremy Corbyn, who is respected by all left wing groups and before anyone asks, no he did not offer me a place in his cabinet if he wins.

In over 40 odd years in the Labour Party I can only think of those febrile meetings against Thatcher during the coal dispute where an atmosphere like this was experienced. Corbyn if truth be told really is the nice guy he appears to be and his speech to the meeting and his ability to answer questions was exceptional. notwithstanding irate remarks from the audience targeted at those party members, some senior who are accused of having disgraced themselves with their attacks on Corbyn, he unwaveringly refused to retaliate and in so doing looked like a giant among pygmies. He does this with ease because he appreciates as many of us do that the 'personal' stuff is being hyped out of all proportion by the Tory press, this is nothing more than the now customary struggle for the heart of the party as well as control of it or, to put it more simply, left V right. The additional energy and enthusiasm is down to the impetus now being with the left for the first time in quite a while and as our old friend Corporal Jones would say "they don't like it up em, they just do not like it up em" were the positions inverted we would hear very little because the press would be more contented.

Jeremy Corbyn is enjoying a tremendous surge in support because his three opponents are very similar and each represents what is now the genuine 'Old Labour' the Labour of the Blairites which, despite winning three elections has taken us to where we are now, their mantra about three victories in a row is worn out and the changes they made have not stood the test of time. Along with many others, I, while loving the Labour victories was never at ease with the direction we were taking , I fought on like many other comrades, regrettably other's didn't but it is my fervent wish that they will come back. The reality is that when you look in depth at our society it is impossible in all honesty to describe it as decent or tolerant, I don't think that I need to rehearse again my reasons for saying that, they are all around us.

The cure remains what it has always been, not always in the same words or order but.  Equality, Peace, Justice for all, the meaning of the old "clause 4", Solidarity, The Redistribution of Wealth from Rich to Poor, I could go on but you have heard it before, it is now back on the agenda and it is still why I joined The Labour Party and more importantly why I am still in it. The Party is not the preserve of The Parliamentary Labour Group it belongs to all members, let's show that to be the case and elect Jeremy Corbyn.
Posted by Cllr Terry Kelly at Saturday, August 15, 2015

"To paraphrase Mark Twain". You are seriously funny and a a smithword!

How dare you I am far better looking that that 3rd rate chancer.

Aye but nowhere near as funny.