THE SNP LIES ARE PILING UP AND THE NEW RECRUITS ARE ALREADY STARTING TO REALISE THAT THEY HAVE BEEN DUPED.

Here dear readers is an update on our SNP Scottish Government's progress or lack of progress as it turns out. They are now learning the hard way that success brings scrutiny and scrutiny exposes incompetence and lies. Not included in the production below is the total collapse of their flagship policy of carrying out major projects without using PFI which they condemned Labour for, their lies on that issue have caught up with them spectacularly as they are now bringing in private finance to pay for these projects, just as we said they would have to. Along with the colossal lies about oil prices and hidden oil fields as well as their ludicrous U Turn on not voting on English matters they are already looking a government  led by the Marx Brothers. The rumbling has already started with the new members saying to each other WTF have we joined?. Sturgeon and the men in Grey kilts have done underhand deals on "fracking" and also are now desperately trying to find a way to avoid another referendum following the famous "once in a generation" statements, a patterm is emerging isn't it, that promise was also a lie. There may be trouble ahead. 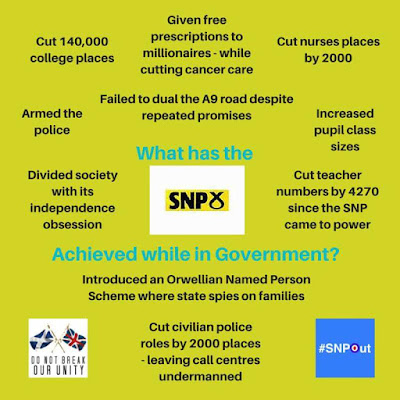 Terry - at least you are honest about your loyalty to the British State.

Can I ask you if you would refuse an honour like a knighthood or a seat in the House of Lords if you were offered it?

I disagree constantly with what the British State does but states don't interest me people do. As far as a knighthood and the H o L is concerned I regard your question as an insult.

Can I ask you Terry, what policies of the SNP do you agree with?

The SNP as far as I am concerned do not have policies 'plural' they have a policy 'singular' that is independence and I am opposed to it. They might say we have policy X one day and change it to policy Y the next because policy Y now serves the cause of independence better. Outwith independence they stand for nothing and believe in nothing.

At last we agree, the SNP are a single issue party. They want independence as do their membership. So Mr Kelly how bad must labour in Scotland be when a single issue party have become the go to party for the Scottish electorate. We all know what they stand for yet we continue to increase their share of the vote, does that not tell you anything?

you and your minority political party will continue to underestimate the intelligence of the people of scotland until you are looking up and wishing you could get the type of support that UKIP have in Scotland.

The salient point Mr. McCabe for those cerebral enough to spot it is that the people who are supporting the SNP are not aware of the implications of a single issue party and the SNP do not advertise themselves as a single issue party, they prefer to lie. They have created an extremism which is of a fascist nature and is driven by anti English racism. It really isn’t about intellect. Scientists, professors, doctors, teachers, inventors, lawyers and artistes became fanatical supporters of Hitler, Mussolini and Franco. The SNP have already made a mess of the Police, The NHS and Education as well as telling the billionaire businessmen that they are not against Fracking and signing up to bigger private loans through PFI than Labour ever did. Meanwhile the sounds of dissent and resentment are already being heard from all the naive new SNP members who were conned by the SNP leadership. That leadership are the ones who are now desperately trying to find a way of explaining why the second referendum is a none runner, telling these new members who are harder to cheat than the knuckle dragging old guard that the SNP is not retreating but simply marching in the opposite direction, will not IMO work, you think Labour have problems?.