A RIGHT LOAD OF OLD SWADDLING 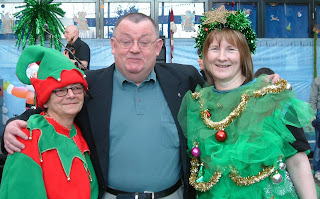 Tannahill Centre Ferguslie Park, Saturday 12.30 this is me and chief Elf Margaret Canning with the well known Christmas tree Maggie McCulloch ( a thorn between two roses ) the picture below is Wendy Alexander doing the count down to the switch on, she's having more fun than the weans. We are all waiting for that other big guy with the beard, not Fidel this time but Santa, the atmosphere is such that you could throw your hat in the air and it would stay 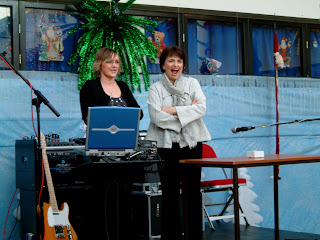 up there. A team of Elfs ( some wag called them 'the national Elf service' ) + fairies and folk dressed as Xmas trees seem to be everywhere, he arrives, not in a sleigh, but in a beautiful vintage car, as he exits I mention that I was not aware that Santa had heavily tatooed arms, cue bedlam. My friend and comrade, local MSP Wendy was there with her lovely twins and equally lovely husband Brian, Wendy and I then done a local radio interview and were questioned by two smart young girls, it really was happy chaos, stalls selling everything and anything and a band blasting away, it was like 'the old bazzar in Cairo' a great start to Christmas. Meanwhile our Prime Minister is in the Holy Land trying 2,000 yrs on to bring about 'peace on earth' no pressure there then. Jesus Mary and Joseph were Palestinians, what a thought, all this time and instead of the Romans in occupation we now have the Israelis and the innocents are still being slaughtered, the Roman occupiers used torture and crucifixion while today the Israelis use torture and tanks. I hope everyone's God is watching, peace in Palestine ? wouldn't that be a great start.
Posted by Cllr Terry Kelly at Tuesday, December 19, 2006