MUSIC TO KEEP THE SPIRIT FREE-THIS LAND IS YOUR LAND.

Truman, Eisenhower, Kennedy, Johnson, Nixon, Ford, Carter, Reagan, Bush Senior, Clinton, Bush Junior and now Obama. These are the American Presidents that I have lived through, most are crooks, and I find only Carter and Clinton tolerable, Kennedy was of course the greatest let down of all. I was 13 when he was elected and joy was unconfined in households like ours where, to paraphrase W.B. Yeats ”green was worn” A fireside rug adorned our living room wall showing Kennedy looking young and heroic with the White House and the stars and stripes behind him. He was a secular saint to people with Irish backgrounds everywhere and the disappointment was crushing when I later learned the truth about him and his wretched family, they were like modern day Borgias. The guys listed above are a strange mixture of dullards, crooks and incompetents with one or two decent incumbents like Clinton, Carter and now hopefully Obama. Ford, Reagan and Bush Jnr. were simpletons who were put there to serve corporate America, to do this as required there had to be a distinct lack of intelligence and great gullibility and these 3 supplied that. Nixon and Bush Senior could have been Mafia bosses had they wanted to but, they preferred bigger crimes. Johnson was a flawed bully and a huge missed opportunity because he could have been great. I was barely aware of Truman and Eisenhower. 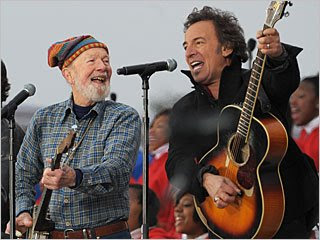 ‘Obama brings hope’ that has been the mantra but; I only bought into it completely yesterday. This is a picture taken at the Inauguration Concert in Washington, the song being sung is sometimes referred to as the real American national anthem, “This land is your Land” by the late American singer, writer and political activist, Woody Guthrie, a ‘non person’ for many years because of blacklisting and political chicanery. The old guy next to Springsteen playing the banjo in the woolly hat is another ‘non person’ an American communist, Pete Seeger 89 years old; referred to as ‘the father of American folk music’ he also bore the brunt of McCarthyism when he too was given a prison sentence and blacklisted during that dark period for America. Guthrie and Seeger of course like many other blacklisted Americans served during the Second World War, Bush Jnr. by contrast managed to miss Vietnam and still became “Commander in Chief” of the American Military, a dreadful insult to military people past and present.

That Obama is prepared to include all Americans judging by this picture can only be a good thing, the song says that America ‘is your land’ it means everybody not just the rich and powerful but everyone, people might get an education now, people might get health care now, who knows the disgracefully massive prison numbers might reduce. ‘Anyone can become President of America’ so they say; and to a certain extent Bush Jnr. proves that but; this is different, this guy definitely comes from the other side of the tracks; the first black American President, it doesn’t get any bigger than that.

The sight of Pete Seeger standing there singing “while all around me a voice was chanting, this land was made for you and me” was inspirational, the American workers and the Liberal community have come through some dark depressing times; decent Americans have seen their country used and cheated by wealthy crooks and seen it’s reputation destroyed in every corner of the world, Obama’s task is to reverse this decline and restore honesty and dignity to that great country.

Those who put Nixon, Bush Sen. Bush Jnr. etc. into power have not gone away, they have retreated in the face of a mighty anguished cry of “enough is enough, we want our country back, we want our dignity back and we want a decent future” The right wing corporate gangsters will do their utmost to destroy the dreams of the American people at every turn and Obama and his family will live their lives as their number one enemies, these people will show no mercy, they will have lost influence, power and above all money; they are ruthless and completely devoid of any morality or decency.

I heard a rumour that Cllr Derek McKay wants his middle name changed to Obama, he wants to be all things to all men as well!

If Bush was such a bad guy why did your past and present leader fully support him ?

(Anonymous) 20/01/09
The more ridiculous Derek becomes the more he is admired within the ranks of the SNP hierarchy who know a ‘yes man’ when they see one.

(Anonymous) 20/01/09
You don’t seem to have a very good grasp of this stuff do you. Bush never made a decision in his life he isn’t capable of logical thought. Blair supported America in much the same way as Britain has maintained the “Special Relationship” with presidents like Kennedy, Reagan, Nixon, Bush Sen. Ford, Etc. crooks and fools all of them.

"‘Anyone can become President of America’ so they say"

Not anyone Councillor. The aboriginal peoples of America have been excluded for years, shunted into apartheid style homelands and opressed with alcohol.

It is a great pity that it is not even a true descendent of the slaves has become President, but the illegitimate son of a Kenyan immigrant and a white woman from Kansas.

All the Americans have voted for is a mulatto version of Tony Blair.

They have been treated terribly but I don’t think they are barred from being president.

Your description of Obama and his background is rather disturbing would you like to elaborate? e.g. what has Blair got to do with it? is there something wrong with someone being mixed race?

I'll take this one up if you don't mind, Terry.

Article II, Section I, Clause 5 of the Untied States Constitution sets the principal qualifications to be eligible for election as President. A presidential candidate must:

Be a natural born citizen of the United States

Be at least thirty-five years old

Have been a permanent resident of the United States for at least fourteen years.

Nowhere in the Constitution is a Native American forbidden to hold this office. Furthermore, an attempt was made to prevent Obama from being nominated by arguing that he was born in Hawaii at a time when Hawaii was not yet a state. This cowardly action failed, and as a result, all that Rosa Parks, Marting Luther King Jr. and others worked for is coming to fruition. To draw distinctions between ancestors id idiotic in the extreme.

It remains to be seen whether Obama can deliver on his promises, but I for one am prepared to give him time before passing judgement. Who cares where his father was born, or indeed his mother? What matters is the substance of the man. Tony Blair turned out to have none. I seriously doubt Barack H. Obama will even approximate to a Blair.

Thank you for that information; I had no idea those restrictions were in place but I was sure the American Indian was eligible.

I have been very impressed with his start, Pete Seeger inclusion was very symbolic and his early moves on the International scene as well as justice and human rights are a breath of fresh air.

Whatever he amounts to or achieves, his achievements to date have been quite staggering. Perhaps more so than you or I are able to grasp, I wish him well.