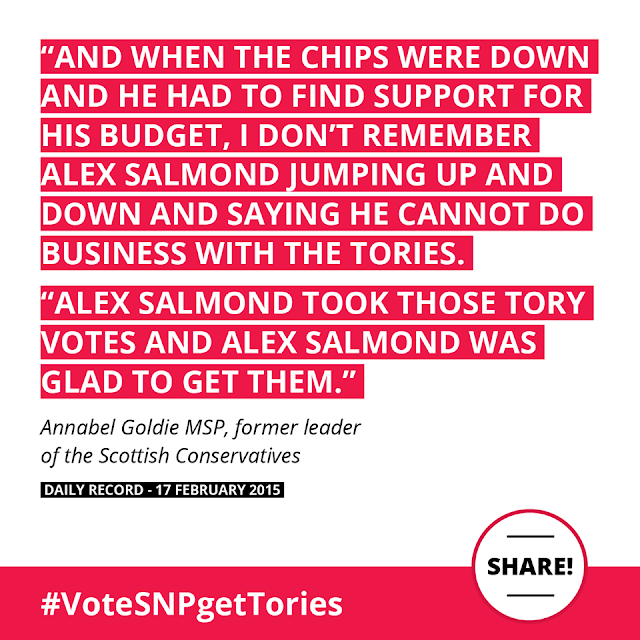 Quoting your better together allies, how did that gig work out for the labour party in Scotland Terry ?
How many MP's do you have now? Or members? care to hazard a guess how many MSP's you will have in June? or how many councils you will control in June 2017?

The SNP managed a minority government so well that the people of Scotland rewarded them with an overall majority in a voting system designed to make that very difficult. The people are now about to reward them with a third term with an even larger majority, this follows the 2015 general election where they won 56 out of 59 seats at westminster, and you think that a fabricated quote from Annabelle Goldie is going to bring all of that tumbling down.

The people of Scotland looked on in horror as Darling spoke at the Tory party conference and Brown carried out Cameron's instruction to terrify scotlands pensioners. We watched in astonishment as the labour MP's trooped through the lobbies to support tory austerrity budgets or sat in the westminster bars abstaining their traitorous hearts out.

The people of scotland have judged 50 years of labour dominance and spoken. and they have said bye bye, don't let the door hit your bahooky on the way out.

Did you notice that neither Salmond or the SNP disputed Ms. Goldie’s statement? The Tories and the Communist Party were our better together allies, you clearly haven’t grasped what went on have you?. The SNP managed a minority government by doing an under the table deal with the Tories. Labour did not support Tory Austerity and what we are seeing now in Scotland is SNP austerity. The SNP will destroy itself in due course; no political party can survive when 90% of its members and elected representatives are out and out rogues.

56 out of 59 mp's, overall increased majority at Holyrood come May this year, overall control of all of Scotlands councils come 2017. Read it and weep yesterday man.
Go and enjoy your boosted councilors pension, just don't be brash about it as you walk through the poorest council ward in Britain.

The big vote said NO to independence and the SNP have abandoned it and they will never form a UK government. It's just a matter of time until people realize that the only way to get rid of the Tories is by voting Labour, the disintegration of the SNP has already begun led by the nationalist thugs in Westminster and their behaviour will hasten their downfall.

Labour will never form a govt anywhere again. A new democratic socialist party will emerge to contest the Scottish elections in an independent Scotland, and the right and left wing factions in England will split,the Labour party is dead, dead, dead.

Labour will be here when the SNP are long gone.

Labour will be here when the SNP are long gone. maybe you are right Independence will kill off the SNP but the people who form the SNP will form the core of a new democratic socialist party, maybe they will call it Labour Scotland just for a laugh.

It's getting embarrassing again, I see Labour stood shoulder to shoulder with the Tory's to vote against the Scottish govt budget? despite all your rhetoric about the Tory/SNP agreements on tax policy.


ha ha ha ha ha. The labour party you couldny make it up.

And how is that second referendum coming along?.

Congratulations Mr. McCabe for managing to write a post without sounding like a drunken snp street thug. As far as the substance goes I suggest you go and read this article again and then try to address the points made, that would be another step in the right direction.