FOR THE BEDRAGLED SNP/SEPARATIST/CYBERNATS, IT’S WOE, TWICE WOE AND EVEN THRICE WOE, IF THIS WAS A BOXING MATCH THE REF WOULD STOP THE FIGHT.

Just when alex salmond and the “tartanshirts” think things can’t really get any worse, I have the delightful task of publishing the table below which is obviously self explanatory. There is another thing which these results highlight. The locations are up in the Highlands which is the area that usually gets shaded yellow on election night, it’s wee Eck’s home turf, the kind of area where he actually swaggers even more than he does at Holyrood. Up here he has taken to imitating the famous swinging gait once perfected by John (Duke) Wayne after he slaughters a couple of hundred Indians or savages as we used to call them when we roundly booed them at Saturday matinees, way back before we learned sense. These youngsters obviously have good sense in abundance. Taking a leaf out of the snp/separatist/cybernat manual called “nobody likes us we don’t care” I would also like to report on another set of polls from the Scottish borders where the No Campaign has approximately 65% of the vote and the yesmen are limping along at 35%, carrying their forks in case it starts to rain soup. Enjoy.
Here is how pupils eligible to vote in the referendum in Moray voted. 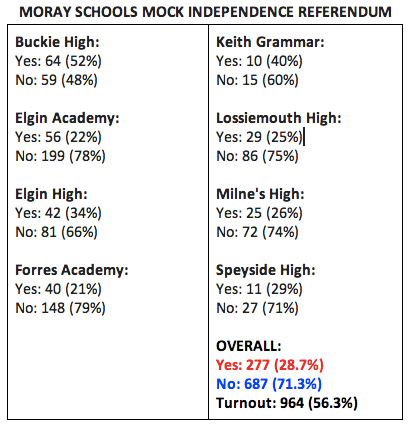 A normal sized sample polled among young people who will be voting for the first time in the referendum and we got------ NO 71.3% and YES 28.7%.

Absolutely brilliant and more proof of salmond's schemes backfiring "get the youngsters to vote and they will support us,they are all stupid", (alex salmond) what a plonker.

"get the youngsters to vote and they will support us,they are all stupid"

have you got a source for that quote i want to use it on a ukok poster but i am afraid it is complete garbage.

you never fail to deliver terry, comedy gold as ever

So, do you think salmond gave these youngsters the vote in the laugharendum because he's just a nice guy, a genial old uncle with their best interests at heart?.

You eejit, he gave them the vote because he thought (wrongly) that they would vote for him, he thinks that being young means you are more susceptible to bulldung, he looked at them with affection in one eye and calculation beaming out of the other, he is a shyster.

Councillor, how come you give chapter and verse on this poll, but refused to do the same on the Union Benefit Poll?

You know me, I'm a simple soul who tries to think the best of everyone, but honestly, something smells about that particular post.

And I'm not too certain the words you attribute to the first Minister have that ring of truth your mammy would approve of, either. You must try to do better, even though you are beginning to panic.....you owe it to your readers.

The post before this one was about benefits, I don't know what you mean. You are right on the ball, I made up the salmond quote, I just didn't think anyone would be astute enough to notice.

Kelly @7.31
The Salmond quote was fabricated...finally we have it from the horses mouth...If you want the truth, don't ask Kelly.

And you know exactly what I mean about your Benefit post. Shall we say your quoting it now, is disingenuous.

No one is daft enough to believe the salmond quote was genuine, not even you. I still don't know what you are on about with the benefits post.

So you're now claiming that no-one would be daft enough that the Alex Salmond quote was genuine. Despite the fact you couched it within quotation marks with alex salmond in parenthesis.
Just a joke like Darling's comparison with Kim Yong-il?

You really are a reprehensible little man.

Even after all this time I am still amazed at how incredibly thick some of you people are.

Kelly @ 5.54
Why surprised? You got voted on to the council...that should have given you a clue.

I know...it's a cheap shot, but I can't resist an open goal.

Voted on and reelected 3 times. The people who think my salmond quote was serious tend to be folk like you and snp supporters, not the most cerebral group are you?.

Kelly, 'Voted on and re-elected three times....' Says it all really, doesn't it.

Very selective polling there Terry......Very selective. Plenty polls in Schools and Colleges went the other way in 2014.

It says that a very well informed and sophisticated electorate think I am a good local councillor.

It says that a very well informed and sophisticated electorate think I am a good local Councillor.

salmond and the snp tartanshirts are bombing with young people all over the country, feel free to prove me wrong if you can.

These schools are in salmond's backyard and all you can do is shoot the messenger, tick, tock, tick, tock, not long now.

Another Labour Frontbencher gets into bed with Murdoch. First your Leader and now Andy Burnham feature in a Sun promotion.

I think that's really buggered the Scouse vote, but your thoughts, please, Councillor

well thought out piece explaining the ability of the no campaign, vote nob orders, no thanks, better together, ukok, what the hell is their name this week I cant remember.
Anywho, your little survey shows how easy it is to frighten children, who would have thought it, I hear you might also be doing a decent job frightening pensioners too well done.
Unfortunately big man, we aren't all scared children and terrified cowering pensioners, most of us can stand up to the bully's behind the you better not campaign.
Did you have a look at your official bedfellows, from the electoral register, labour party, conservative party, liberal democratic party, grand order of the orange lodge, alistair McConachie ex ukip holocaust denier, the far right brittanica party, no borders campaign a private company set up by venture capitalists, that's the official registered no campaigners but thats leaving out the bnp and britain first. you must be very very pwoud. And keir hardy must be birling. 21st century Labour, what principles?

Next week we'll see our great leader Alex supporting Andy Murray from the royal box at Wimbledon as once Murray he does Scotland proud with his subliminal tennis skills.

Yet where will you be councilor? Sitting in your pit, bemoaning the fact that two Scottish heavyweights are socking it to England within the confides of their own elitist bubble.

Vote Salmond, cheer Murray and reject Kelly and his Labour cronies from here to September. You know it makes sense.

"we aren't all scared children and terrified cowering pensioners.

Of course your not, most of you are tartanhirts, fascists, racists and cowards who haven't the courage to put you names to what you write.

Do you need to use both hands to find your arse?.

No one insults the people of Liverpool more than you and people like you when you insinuate that they are not capable of understanding how politics works. It is arrogant and offensive and typically right wing.