50 YEARS AGO TODAY IN A GALAXY FAR FAR AWAY. 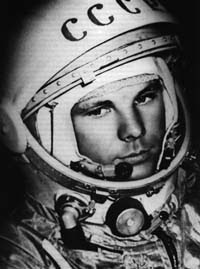 50 years ago today Yuri Gagarin became the first human being to leave the planet earth and Scottish Actor Roddy McMillan wrote this charming wee children's song about the event, to the tune of "oh dear what can the matter be" Gagarin's fame as one of the Family of Man's greatest explorers might well outlive the song but it was a great way for kids at the time to learn about this, one of mankind's greatest ever adventures.

He flew tae the moon when it looked like a farthing,

He said tae the boys at the moment of parting

"Ah'm juist gaun away for the Fair"

Now inside the ship he lay down like a hero,

The doors were sealed up and the countdown was near- o

An Yuri went up in the air

Now when he took off he was shook tae the marra

He circled the poles and he saw the Sahara,

He gave them a wave as he passed over Barra

The day he went up in the air

Now when he went up it was juist aboot dawning,

The time when the rest of the world wis still yawning

Then Yuri returned to the land he wis born in

Withoot even turning a hair

When he came tae London they tried the saft pedal,

A wee bowler hat and a rolled-up umbreddle

But the foundrymen went an they struck him a medal

An gied it tae him at the fair

A nice bit of history, Terry.

You can choose to excuse any evil if it suits you but when I am confronted by Racism, Sectarianism Homophobia etc. my instinct is to attack it and anyone who supports it. If that makes me a bad person then I am pleased to plead guilty as charged.