Hi, this is big Molly here, 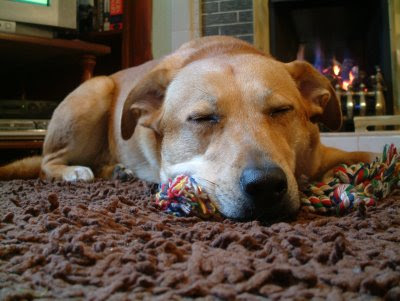 I don't look very alert in this shot because I'm just back from a long walk and a swim in the Clyde as well as a fight with an angry swan, I decided to let him live.

People have been asking the boss about me and my wee pal Bessie ( well sometimes pals ) she is now a fully grown up 100% fighting barking nuisance, I on the other hand am quite well behaved now as becomes a dog who is a Staffordshire Bull Terrior / Labrador cross, I have now gone 20 fights undefeated at Erskine Beach but I'm too modest to brag about it, the pets that hang around there are no match for me.

That's one of the reasons that I've got form, yes, I've done time, in fact the boss keeps threatening to return me to Cardonald " where you belong " says he. I had great mates up there, some of them were great dogs who had strayed off the straight and narrow but they would still be well worth saving, they are good natured and just need a little TLC, what are you waiting for ?


Bessie here, I've been told that I'm gorgeous in this shot but I don't like that kind of stuff, after all I'm a Lakeland Terrorist and we kill foxes and rats, in fact 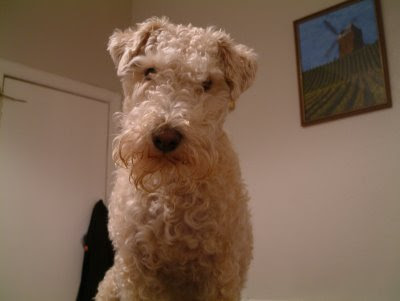 just about anything is fair game, especially when big Moll is with me to back me up. I'm glad she's my mate, she's like a cross between a crocodile and a donkey, I still fight with her but she's less tolerant than when I was a pup, I find the best time to give her a nip is when she is sleeping and then it's offsky and under the bed where she can't reach me.

We are however great with people, especially children ( there's always grub around kids ) this excludes anyone in uniform, postmen, bin men etc. we still have our reputation to think of, There's a big fat magpie which scavenges around our yard and it flies down and then away when we try to catch it, it's a great game and the bird loves it, so do we and we will also love it when we catch it and tear it too bits.

Molly's dead right about the dogs at Cardonald they just need a second chance, what are you waiting for ?
Posted by Cllr Terry Kelly at Friday, March 30, 2007

Go on Terry, go on boy fetch. Bark at the nasty zionist...